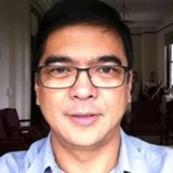 Rev. Fr. Andre Querijero was born on September 23, 1958 in the city of Lucena, Quezon Province, in the Philippines.  His priestly vocation started early in life when, at the tender age of twelve, he joined the Redemptorists to become a missionary. Midway through his studies, however, Martial Law was declared by then President Marcos. His parents made him transfer to Mt. Carmel Diocesan Minor Seminary to remain in close proximity to the family.

After high school, Fr. Andre initially went to the University of Santo Tomas, but eventually earned a degree in Business Management and Marketing from Manuel S. Enverga University.  He later pursued his MBA at De La Salle University.  The oldest of ten children, it became necessary for him to work and help his parents financially. He has had nine years of corporate experience as a Human Resource practitioner at the Philippine Long Distance Telephone Company and Great Pacific Life Assurance Corporation.

The call of the Lord was persistent, his vocation call resurfaced in his late 20’s, at the peak of his career. After discerning and confirming his vocation to the priesthood and religious life, Fr. Andre joined the Order of Discalced Carmelites (Philippine Province) in 1988, and was ordained a Carmelite priest in October 18, 1997. His first assignment was as Vocation Director of the Order, based in Manila. Subsequently, he was assigned in Vietnam, but only after he had acquired a TESOL (Teachers of English to Speakers of Other Languages) certificate, from Teacher’s College, Columbia University, New York City.

Fr. Querijero did his theological studies at the Jesuit-run Loyola School of Theology, Ateneo de Manila University in the Philippines. He received his BS degree in Sacred Theology, from Fu Jen University, Taipei, Taiwan; and his Master’s degree in Pastoral Studies at the Ateneo as well. He also attended short courses on Spirituality at the Washington Theological Union, Washington, DC. Prior to his coming to the U.S., Fr. Andre studied at CITeS (Centro Internacional Teresiano Sanjuanista) and the Universidad de Avila, Avila, Spain for a Master’s degree in Mysticism.

Since 2009, Fr. Andre has taken on pastoral duties in the U.S.; i.e., St. Elizabeth of Hungary Church in Linden, NJ, and Epiphany Church in NYC. He, then, moved to Northern California and served at St. Mary of the Angels Church in Ukiah prior to his present assignment as Pastor of Our Lady of Good Counsel and the Mission Chapel of St. Elizabeth Seton, Philo.